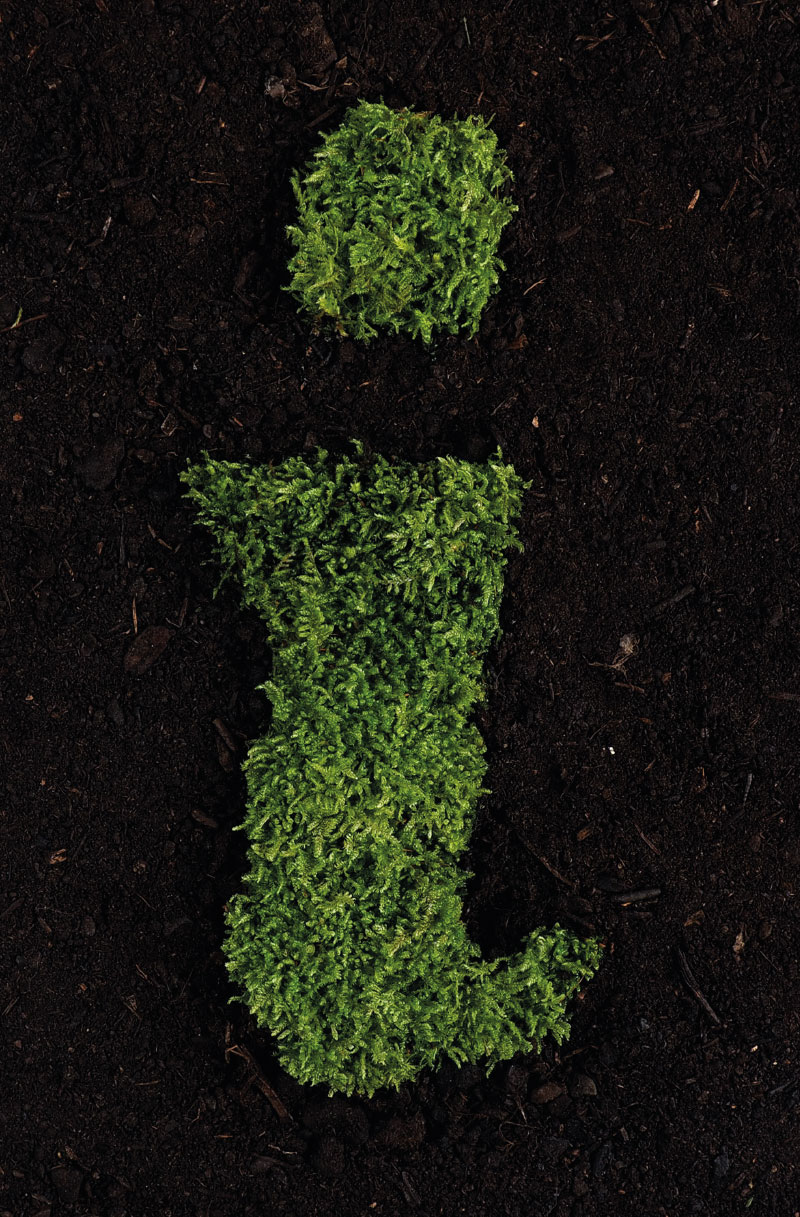 Next to the characters and letters there are a lot of possibilities to give a font functions via open type features, automated or optional settings.

There are language dependent settings and different typesetting options – settings for accents, capitals and small caps, contextual and positional changes and for example stylistic alternates and sets, which combine the alternate shapes. Further different kinds of numbers are within a font and ligatures (letter-combinations) can be defined. In variable fonts you can control the individual variabilities of a font, which can affect weight, width, italic angle and more. Color fonts are type designs based on layered artworks and in multilayer fonts the layers are seperated in font styles to be able to layer text frames.

Always have a look in the open type menus of your design application and use the type features to control the settings of a font. More information further down this page or in the type design documentation (PDF).

Contextual glyph- and position changes, which the font designer prepared for you, happen in context to the letters and signs next to it. These features are often running automatically. You can manually deactivate them or change glyphs back and choose the each other glyph over the open type menus.

Stylistic alternates are formal variants of characters. You are able to choose these alternates, if available, over the open type menus in your software or automate them over other functions, which bring your design application. A set of alternatives can be featured in stylistic sets (see below). 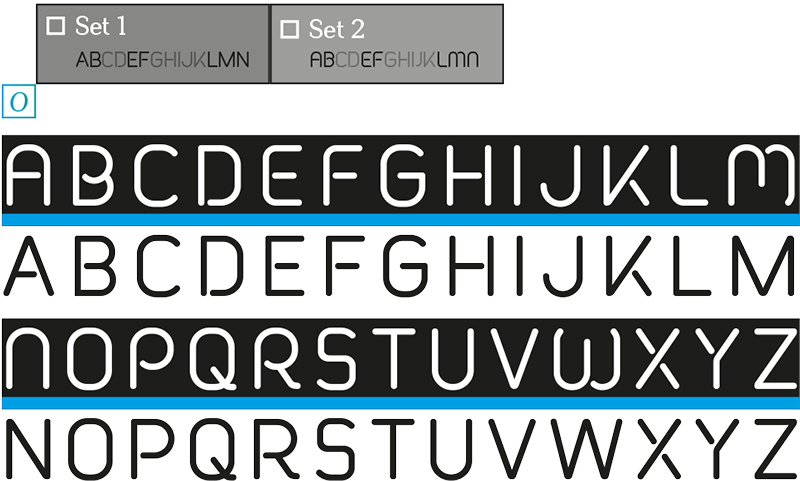 Stylistic sets are collections of character alternates (format sets). If prepared, it's possible to change the face of a font in a certain way by choosing the alternative stylistic set. Stylistic sets can also be used for glyph rotating (see below). 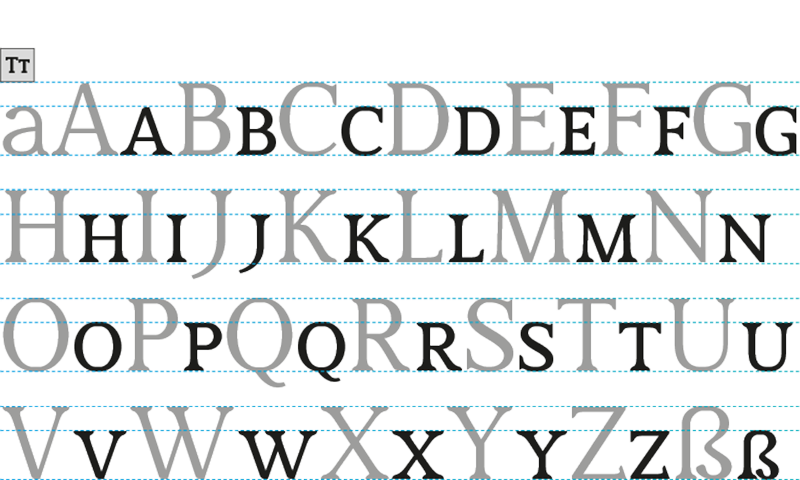 Small caps are uppercase letters on the height and with the stroke thickness of lowercase letters. This is technically not just a case-transformation. The feature allows to access these glyphs when the font is set to small caps.

There are different styles and forms of numbers required and within a font. The "normal" numbers are the proportional / majuscule numbers, further there are the old style numbers for optional use within lowercase settings, small cap numbers for the use within capital settings and tabular figures for the use in tables. Then there are the superior and inferior numbers and the numbers for fractions as well as the fractions themself. As in other features numbers also change automatically to corresponding settings and you can choose them manually.

Combining accents fitting to glyphs automatically and changing, if necessary, as in the case of dcaron. Further with these accents it's possible to build accent glyphs, which are not in the font as stand alone ones for building up more languages.

A ligature is two or more glyphs or letters joined as a single glyph. In font softwares there are optional as well as automated ligatures. However they are integrated in the font software, if they are available, you can choose the ligatures in the menus of your applications, such as a glyphs-table.

In most cases uppercase letters need to have optimized spacing. With the corresponding feature texts get this extra spacing automatically.

There are case sensitive forms & positions. Glyphs like the parens, braces, brackets, the bullet and more are higher when set to uppercase. 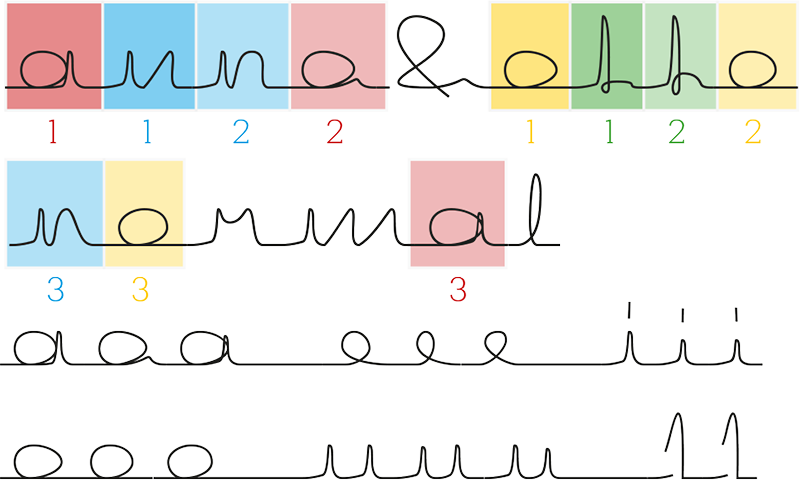 The contextual alternate rotating is an automated feature, which is used in script fonts. If available, more sets of letter variants are integrated in a font and coming up, if a letter appears nearby the same one. 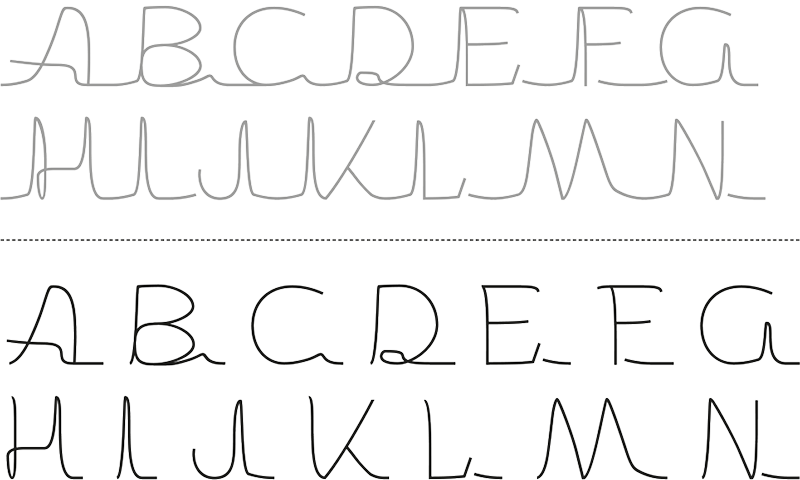 Initial forms are special characters for the beginning of a word, sentence or paragraph. It's possible to activate them over the open type menus.

There may be special characters in fonts, such as music signs, arrows and others. Have a look in the glyphs-table and see, what the font designer prepared.

There are exceptions in design in different font weights. The breaks for instance are automatically switching in thicker weights and variable fonts.

Layered fonts have letters that are stacked in multiple layers of different shades or colors. Some layered fonts are available as combined color fonts with predefined coloring, some actually include multiple files for each layer and provide the possibility to build individual font variants and color combinations. What you need to do, is to have multiple text frames with the exact same content exactly on top of each other or intentionally displaced, each of them with a different font style and/or color. Of course you can also combine different fonts. 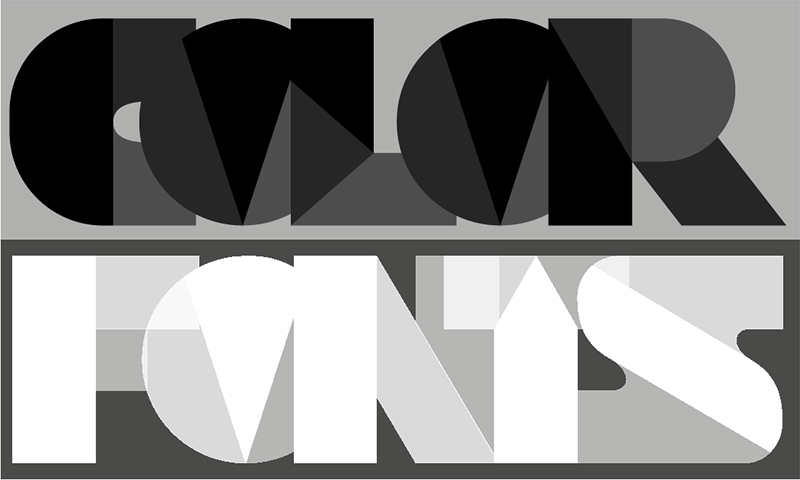 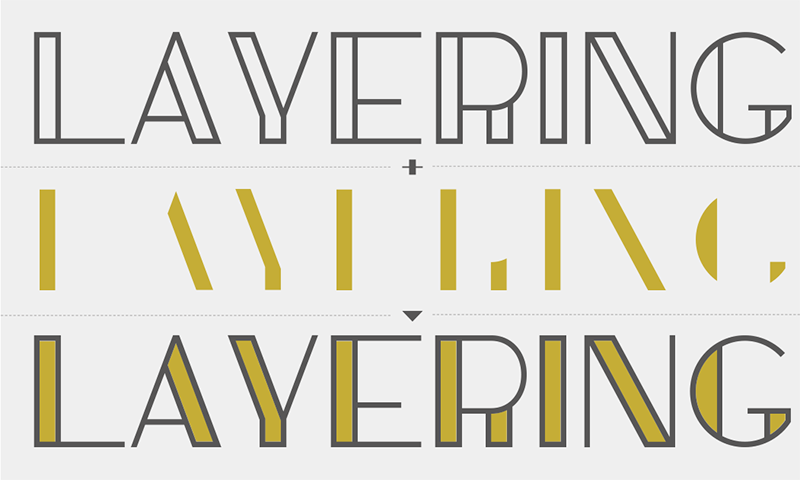 Some of the fonts are ready for variable purposes. To use the variable fonts you may have to copie the font files into correspondending folders in your system, to enable applications to use it. There can be different variability options for weight, width, italic angle, variable serif adaption and more.

Fonts in the category of Open Type Latin Standard must contain at least ~400 glyphs to be able to display the most of the languages based on the latin alphabet – the foundation is the uppercase, lowercase and number glyphs, the basic symbols, the punctuation signs and the accents. All needed combinations complete the latin standard character set. In Open Type Latin Extended there are more accents, combinations, and alternatives like small caps, extended figure and symbol sets available. For instance, old style and tabular numbers or symbols like arrows or music signs are complementary and within the extended sets.

Within the Open Type Pro / Extended Sets there can be thousands of glyphs. In these sets are the characters for the greek and cyrillic scripts and languages as well as the settings for these languages are integrated.

There may be Limited Character Sets, just containing a reduced number of glyphs. 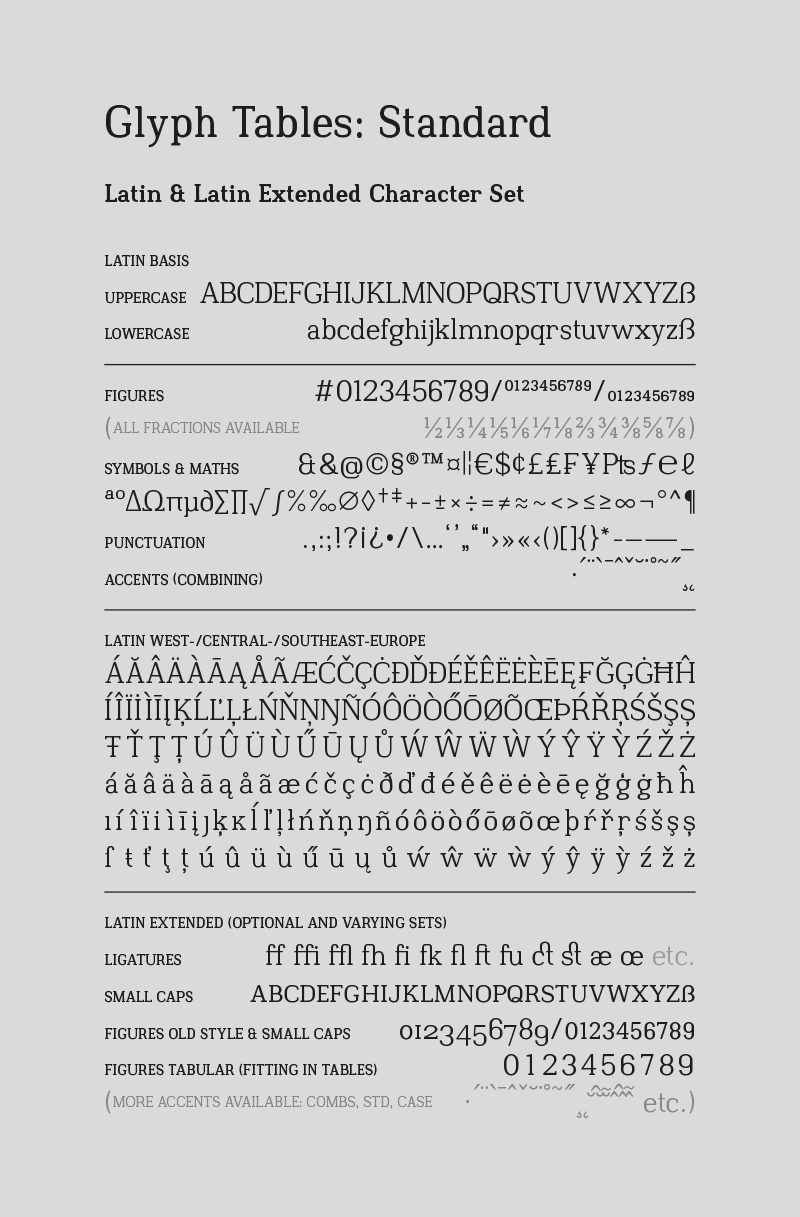 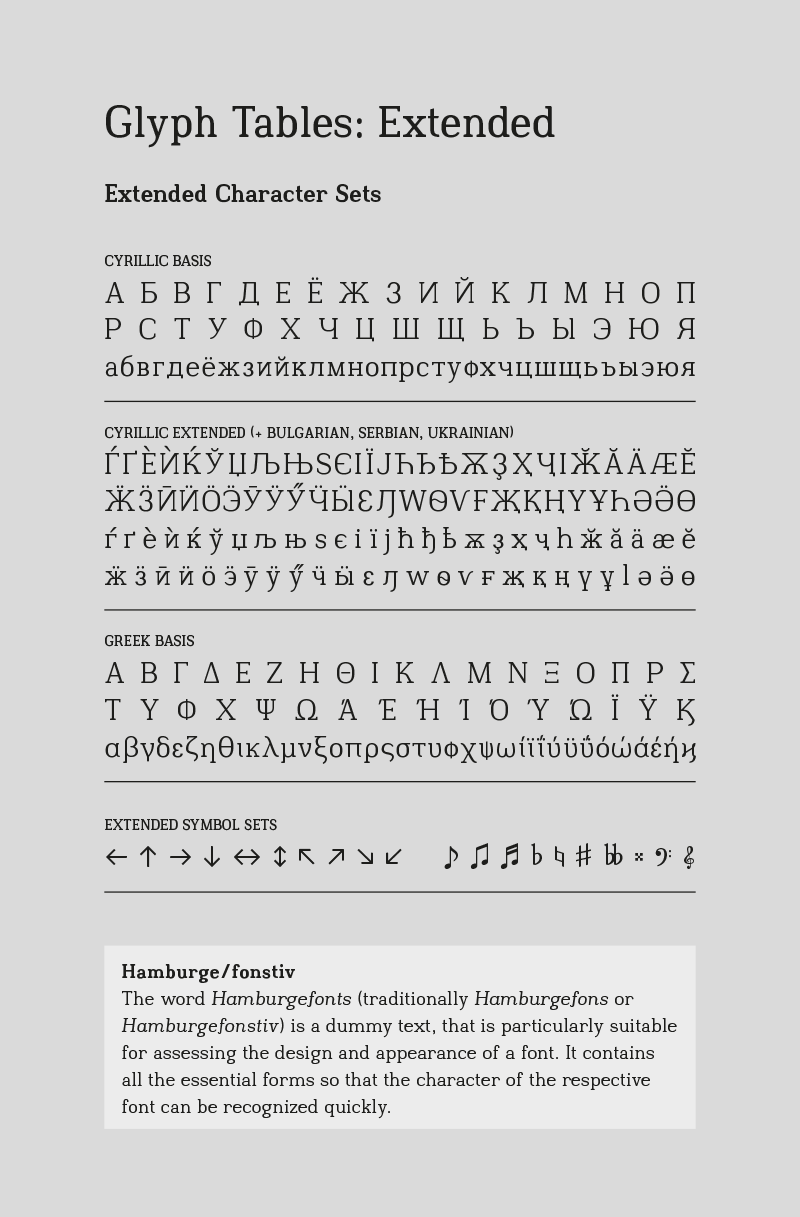